Can We In Good Conscience Vote For Labor?

By Andrew Lansdown and Dwight Randall
Posted June 28, 2016
In Politics
Can We In Good Conscience Vote For Labor?2016-06-282017-05-16https://www.lifeministries.org.au/wp-content/uploads/2017/01/life-ministries-logo.jpgLife Ministrieshttps://www.lifeministries.org.au/wp-content/uploads/2017/01/australian-labor-party-gay-marriage.jpg200px200px

As Christians, can we in good conscience vote for the Australian Labor Party (ALP) in the forthcoming federal election? We at Life Ministries have come to the conclusion that the answer is no.

Of the many matters of possible concern, two are of unambiguous and momentous importance to Christians. The first is same-sex marriage and the second is Safe Schools.

In July last year, Labor leader Bill Shorten vowed to legalise same-sex marriage if he becomes prime minister: “I promise that within 100 days of a Labor government being elected that I lead, I shall move in the parliament of Australia for marriage equality for Australians.”1

As regular readers of Life News would understand, broadening the legal definition of marriage to include homo-sexual “couples” is not only profoundly delusional but also profoundly destructive. Many of the articles we have published on same-sex (gay/homosexual) marriage can be read on our website under the heading, Life News Archives. Two other websites are especially noteworthy for sound and insightful arguments against same-sex marriage: australianmarriage.org and marriagealliance.com.au .

Mr Shorten and his party are passionate crusaders for homosexual marriage and are utterly determined to legalise it.

At its national conference in December 2011, the Australian Labor Party officially adopted a policy in support of same-sex marriage. This policy commits the ALP to actively pursue changes to the Marriage Act to destroy its assertion that marriage is a union exclusively between a man and a woman.

In June last year, Mr Shorten moved a Private Member’s Bill in the House of Representatives to (as he quaintly put it) “finally bring about marriage equality in Australia”.2The bill was defeated because Prime Minister Tony Abbott instructed all government MPs to vote against it.

At its national conference in July 2015, the ALP passed a motion removing the right of Labor parliamentarians to vote according to their conscience on same-sex marriage, effective from the 2019 election. This policy to strip Labor MPs of a conscience vote caused one Labor senator, Joe Bullock, to resign his seat. (See Senator Bullock’s comments about this in his Rally for Life speech, “Former senator speaks up for the unborn”, in this issue of Life News.)

Mr Shorten reaffirmed in February this year his determination to legalise same-sex marriage as soon as he can form government. “If a Shorten Labor government is elected, within 100 days we will put legislation in the parliament for marriage equality,” he said. Furthermore, he rejected the idea of a plebiscite to determine whether or not the majority of Australians want this: “Labor will get the job done quickly and we will save the taxpayers $160m of their money. … The plebiscite idea was incited by Tony Abbott and some of his MPs to kick marriage equality into the long grass of the future.”3

The Liberal and National parties were responsible in 2004, under the leadership of Prime Minister John Howard, for safeguarding marriage by amending the Marriage Act 1961 to expressly state that marriage is heterosexual in nature, being between (and only between) a man and a woman. According to the Parliament of Australia’s Bills Digest No. 5 2004–05, the purpose of the Marriage Amendment Bill 2004 was “To formally define marriage in the Marriage Act 1961,” and “To ensure that same sex marriages are not recognised as marriage in Australia, inclusive of those performed under the laws of another country that permits such unions.”4

The official position of the Liberal and National parties is as stated in the 2004 amendment to the Marriage Act, “marriage means the union of a man and a woman to the exclusion of all others, voluntarily entered into for life.”

It is true that Prime Minister Malcolm Turnbull lacks the integrity of former Prime Minister Tony Abbott on the matter of same-sex marriage. Mr Abbott, first as leader of the Opposition and then as Prime Minister, helped to foil several moves in the federal parliament to legalise same-sex marriage, and for this alone all Australians, and Christians in particular, owe him a debt of gratitude. Mr Turnbull, by contrast, personally supports same-sex marriage, which is a huge disappointment to many on the conservative side of politics.

In an article in the Daily Telegraph titled, “Vote Labor in haste, regret at your leisure”, Piers Akerman warned, “Shorten, should he be elected, won’t just redefine marriage, he’ll destroy it.”5On polling day, we Christians should not help him do this.

The Safe Schools program, we were told, was intended to stop bullying in schools. Albeit with a focus on “gay” students, it was, we were led to believe, simply and nobly an “anti-bullying” program. It turns out, however, that this is not the truth.

The purpose of the program is to glorify homosexual, bisexual and transsexual practices and to bully school children into believing that such sexual aberrations are good for some and optional for all.

The founder and coordinator of the Safe Schools Coalition, Roz Ward (a socialist academic who recently claimed on Facebook that the Australian flag is racist and should be replaced by a red one)6disclosed the program’s true purpose at a Safe Schools Coalition National Symposium in Melbourne, in June 2014. Speaking to a supportive audience, she said, “Safe Schools Coalition is about supporting gender and sexual diversity. Not about celebrating diversity. Not about stopping bullying. It’s about gender and sexual diversity. About same-sex attractive. About being transgender. About being lesbian, gay, bisexual – say the words – transgender, intersex. Not just, ‘Be nice to everyone. Everyone’s great.’”7

Far from being about protecting a few sexually-confused schoolchildren from bullying, Safe Schools is about the destruction of all decency and morality in sexual matters. As one commentator states: “This program gives its support to an array of sexual experimentation; it suggests young people can bypass school and other internet filtering systems to access sites that carry porn and sex aids; it presents as safe and acceptable hormone therapy and surgery to become transgender; it presents as acceptable dangerous female chest binding so girls can appear gender ambiguous; it encourages schools to allow for cross-gender students to use the change rooms and toilets of the sex with which they want to identify; and it provides links to adult gay organisations.”8(For further details of the Safe Schools program, see the article, “Nationals MP slams perversity of Safe Schools program”, on page 3 of this issue of Life News.)

Pressured by parental concern and his own backbenchers, Prime Minister Malcolm Turnbull ordered a review of the Safe Schools program in February this year. Following the review, significant (though insufficient) changes were made to the program and the government decided to cease funding it after next year.

Mr Shorten vehemently opposed the review of the program, claiming that the push for a review arose from “this ridiculous, absurd obsession by the right wing of the Liberal Party about Safe Schools.” And he impugned Senator Cori Bernardi as a “homophobe” for pushing for the review.9When Mr Turnbull agreed to adopt the recommendations of the review in March, Mr Shorten accused him of caving in to “the rabid ideologues of the Liberal National Party”.10Homophobes, rabid ideologues—so much for tolerance and courtesy. (Perhaps, Daniel Andrews, Labor Premier of Victoria, was following Mr Shorten’s example when he belittled opponents of Safe Schools as “bigots” and “dinosaurs”.11)

In a lecture, “The role of the left in the struggle for LGBTI rights”, delivered at the 2015 Marxism Conference in Melbourne, Roz Ward brazenly revealed that her Safe Schools program was an expression of her Marxist worldview. Ms Ward claimed that “To smooth the operation of capitalism the ruling class has benefited, and continues to benefit, from oppressing our bodies, our relationships, sexuality and gender identities alongside sexism, homophobia and transphobia.”12This Marxist make-believe and malice is the driving force for her Safe Schools program.

One commentator concluded an analysis of Ms Ward’s Marxist lecture with this question: “Will parents of Australian children in schools really give their approval to a program that, on the pretext of preventing bullying, is really about deconstructing the moral and social fabric of our society, including the family?”13If we as Christians are compelled for love of our Lord, our families and our nation to answer “No!” to this question, how can we possibly vote for those who are willfully determined to make our schools and schoolchildren morally unsafe by forcing the Safe Schools program on them?

* Under the terms of the policy adopted at last year’s ALP national conference, Labor MPs should still have a conscience vote on same-sex marriage throughout the term of the next parliament. But, sadly, this now hardly matters. For, given that Senator Joe Bullock appears to have been the only delegate at the last ALP national conference to oppose the motion to deny Labor MPs a conscience vote on same-sex marriage, it is unlikely that any Labor MPs in the new parliament will be opposed to same-sex marriage, let alone wish to vote against legislation to legalise it.

7. See a video clip of Roz Ward making this statement on YouTube – www.youtube.com/watch?v=j5uNocBCw3Q&feature=youtu.be.

9. “‘At least I’m not a homophobe’: Bill Shorten in tense exchange with Cory Bernardi”, The Age, 24 February 2016 –http://www.theage.com.au/federal-politics/political-news/at-least-im-not-a-homophobe-bill-shorten-in-tense-exchange-with-cory-bernardi-20160223-gn1xdl?

12. Roz Ward, “The role of the left in the struggle for LGBTI rights”, Marxism Conference, Melbourne, 2015. Listen to, or download, her lecture here – http://marxismconference.org/index.php/previous-highlights/audio-archives/item/1310-The-role-of-the-left-in-the-struggle-for-LGBTI-rights.html 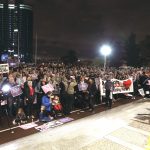