Thousands of Christians in German refugee shelters are being persecuted by Muslims, sometimes even by their security guards, according to a new report, which asserts that in most cases German authorities have done nothing to protect the victims.

The study alleges that German authorities and police have deliberately downplayed and even covered up the “taboo issue” of Muslim attacks on Christian refugees, apparently to avoid fueling anti-immigration sentiments.

The study — which confirms a Gatestone Institute analysis about Muslim-Christian violence in German refugee shelters — documents more than 300 incidents in which Christian refugees in Germany have been physically and sexually assaulted, and even threatened with death, because of their faith.

The report is based on the interviews of 231 Christian refugees conducted between February and April 2016. More than 80% of those interviewed were male and more than half were younger than 30. Most of those questioned came from Iran, Afghanistan and Syria. Nine out of ten of those participating in the survey were Christians with a Muslim background. Of these, the majority had already converted to Christianity in their home countries.

Of those interviewed, 86 said they had been physically assaulted at the hands of Muslim refugees and shelter security staff, many of whom are also Muslim. More than 70 said they had received death threats, 92 had been insulted for their Christian faith and 62 had been subjected to “very loud religious music or prayer,” presumably of the Islamic variety. Others said they had been subjected to physical attacks in the form of punches, spitting, pushing and sexual abuse. Around 75% of those interviewed said that harassment from Muslims is a “frequent” problem.

According to Open Doors, the report “only shows the tip of the iceberg” because “many Christian refugees are frightened of facing more difficulties if they report incidents.” Others fear that “the information could get into the wrong hands and cause danger for relatives still living in their home countries.” The report states:

A major obstacle to the survey was that many victims were afraid to participate. They feared negative consequences in the event that their personal information were to fall into the wrong hands. Their concern was not only on the possible consequences for them personally and for their families in Germany, but also for their relatives who continue to live in the countries of origin.

Another major obstacle was that many women are reluctant to report sexual assaults because of feelings of shame which are often more pronounced among Middle Eastern women than those in the West.

To make matters worse, many refugees have had negative experiences with the authorities and police in their countries of origin because of their Christian faith. They are used to being treated as second-class citizens. Now they see that things are no different in many refugee shelters in Germany — a country with freedom of religion — and they [have] not even once received help.

The report includes testimonies from Christian refugees who describe a “constant climate of fear and panic” in German shelters:

The report includes an account from Gottfried Martens, a pastor in Berlin, who describes incidents of Muslim harassment that occurred in early May — incidents which the police have still not bothered to investigate:

A Christian couple from Iran was increasingly being bullied by the Afghan leader of an asylum shelter in Berlin. As ‘infidels’ they were not given a bed and were forced to sleep on the floor for months. It finally got to the point that the Afghan devastated their sleeping area and personally destroyed their Christian objects (Easter candle, Bible, parish newsletter).

Another Christian was harassed by Muslim refugees who chanted the Koran around the clock because of his conversion. Yesterday evening, he tried to kill himself with a razor blade. Fortunately, he was rescued in time.

According to Open Doors:

It is alarming that Christian refugees and other religious minorities increasingly are facing the same persecution and discrimination as in their Muslim countries of origin, and not even in Germany can they get the expected protection.

Despite increased reports about this problem by the media, charities, human rights organizations, church leaders and Christian organizations, German authorities and politicians have hardly ever launched an investigation. Instead, we believe that incidents are deliberately downplayed and even covered up. During confidential discussions with researchers from Open Doors, it has become known that even in police stations, religiously motivated attacks on Christian refugees are not documented as such.”

As a result, many cases of sectarian violence are not statistically recognized and are not classified correctly in terms of their severity and frequency. This means that a large number of religious-related human rights violations against Christians and other religious minorities are treated as irrelevant.

The report concludes with a number of recommendations for the German government to help ease the burden on Christian refugees:

At a press conference marking the release of the Open Doors report, Volker Baumann, director of a group called Action for Persecuted Christians and the Needy (AVC), said that up to 40,000 refugees in German shelters are being persecuted due to their religious beliefs.

According to Gottfried Martens, the pastor from Berlin, the German government has lost control over the situation. In an interview with Frankfurter Allgemeine Zeitung, he said that most Christians who are being persecuted in German shelters dare not file a formal complaint due to fears for their own safety. In those cases where complaints are filed, Muslims file counter-complaints. Moreover, it is hardly ever possible irrefutably to prove incidents of harassment. Thus the vast majority of refugees decide not to complain in order not to aggravate their situation.

Christian refugees from many different countries are trying and failing to find safety in Europe and it is likely that the report only shows the tip of the iceberg. It is clear that many Christian refugees — especially those who are converts to the Christian faith — live in fear of persecution from Muslim refugees who make up the majority of residents in the refugee hostels set up throughout Europe. It is sobering to hear persecuted Christians telling a Western country that they recognize the very same persecution patterns in operation as in their home countries. 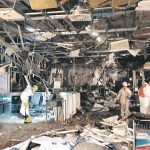