Labor’s loss a win for Christians

by Dwight A. Randall

Four days before the Federal Election, at the 21st Annual Rally for Life attended by approximately 2,000 people at the Western Australian Parliament House, I warned against voting for Labor.

I said, “Bill Shorten and Tanya Plibersek, the leader and deputy leader of the opposition, have chosen to make abortion an issue in this election, and it is possible that they may pay the price for doing so.”

It now appears they did. In scenes that reminded me of Hillary Clinton’s defeat by Donald Trump, many leftist progressives had an absolute meltdown. For example, Jane Caro, a well-known feminist, social commentator, writer and lecturer, tweeted, “Well, Australia may be (expletive) and the whole planet not far behind but I am at the best, most brilliant and cool wedding I have ever been to. So I shall just dance & get (expletive) & stick two rude fingers up at all the truculent (expletive) who voted to turn backwards.”

Since the election I have read and heard many commentators express opinions about Bill Shorten’s failure to win the “unlosable election.”  Some of the reasons advanced include his lack of popularity, his inability to explain complex policies, and his commitment to increased taxation.

But apart from many Christian and traditional values organisations, I have heard little about the widespread opposition of Christians to Labor’s radical social and moral agenda advanced by Bill Shorten.

Perhaps Bill Shorten and Tanya Plibersek should have considered that by promising to require all public hospitals to provide abortions; pressuring the governments of NSW and SA to legalise abortion; funding abortions with taxpayer money so that women could obtain them free of charge; and setting up a “reproductive clinic” in Tasmania so that women could obtain abortions without travelling to the mainland—perhaps they should have considered that there could be a voter backlash from Australians who believe in the sanctity of human life and genuinely love babies.

Perhaps Shorten should have considered that support for Lesbian, Gay, Bisexual, Transsexual, Intersex, Queer, Questioning and 56 other variants would result in the withdrawal of support from “truculent” voters who are stubborn enough to still believe there are only two sexes.

Perhaps he should have considered that imposing radical gender theory upon children in public schools would ensure the loss of support from voting Christian parents.

Perhaps he should have considered that removing protections from Christian (and other religious) schools so that schools could be subject to charges under the Sex Discrimination Act for terminating the employment of homosexual teachers or preferring to hire teachers who share the ethos and standards of the schools would incense the parents of children in those schools.

Reflecting on the result of the election, could it be possible that the 2019 federal election will be seen as a turning point in Australian politics? Could it be that the political pendulum that has been swinging for decades in the direction of the irreligious left may have finally reached its apex, and is starting to swing back? Please God, grant this is the case!

Consider what has just taken place. Pro-life organisations across Australia warned that voting for Labor would result in more abortions. Hundreds of Christian schools across Australia wrote to parents urging them not to vote for Labor because of threats to religious freedom. Christian-based organisations across Australia warned against voting for Labor because of Labor’s promotion of harmful indoctrination of children relating to homosexuality and gender diversity. Christian-based political parties like Australian Christians urged voters to place Labor and the Greens dead last. Pastors across the nation urged their members to vote with Christian moral and social concerns central to their decision. Thousands of Christians across the nation joined in concerted prayer over a period of a month leading up to the election.

And the result was that something extra-ordinary and seemingly miraculous took place. The party that supposedly could not lose—the party that had been ahead in every election poll for two years—lost.

Australia’s new Prime Minister, Scott Morrison, is a professing Christian. Every Christian in every church across Australia should pray that God will grant him wisdom, courage and compassion as he leads the country.

The power of prayer combined with the votes of Christians will impact the future of unborn babies, school children, Australian families, Christians, churches, Christian schools and Christian institutions. Christians should take heart that they are making a positive difference. Their votes are not only helping to halt Australia’s moral downgrade, but to make it possible for moral and social transformation. This election is proof of that.

Dwight Randall
Dwight is the director of Life Ministries. He is also the acting national president of Australian Christians. Dwight also serves as the president of the Coalition for the Defence of Human Life, and the vice chairman of Living Alternatives Ltd., which runs four crisis pregnancy centres. Dwight is married to Sheila, who until recently was the head of the Arts Department at a large high school in Perth. Sheila continues to teach. They have four married daughters and sixteen grandchildren. Dwight is a personable, credible and honest man, who fights for family and Christian values in society.
Recent Posts 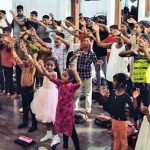