Trump, Shorten and Morrison on abortion

As part of their inexorable push to the extreme left, many Democrats in the United States are now actively supporting late-term abortions and even infanticide. Donald Trump was mocked when he warned about this during the 2016 presidential campaign.

Since becoming President, Mr Trump has (a) cut all US aid to foreign organisations that provide abortions; (b) attempted to cut funding to the mass abortion-provider, Planned Parenthood; and (c) appointed two pro-life judges to the Supreme Court.

In his State of the Union Address before Congress on 5 February 2019, President Trump condemned the Democrats’ heartless stance and declared his intention to oppose it. He said:

I am also proud to be the first President to include in my budget a plan for nationwide paid family leave—so that every new parent has the chance to bond with their newborn child.

There could be no greater contrast to the beautiful image of a mother holding her infant child than the chilling displays our Nation saw in recent days. Lawmakers in New York cheered with delight upon the passage of legislation that would allow a baby to be ripped from the mother’s womb moments before birth. These are living, feeling, beautiful babies who will never get the chance to share their love and dreams with the world. And then, we had the case of the Governor of Virginia where he basically stated he would execute a baby after birth.

To defend the dignity of every person, I am asking the Congress to pass legislation to prohibit the late-term abortion of children who can feel pain in the mother’s womb.

Let us work together to build a culture that cherishes innocent life. And let us reaffirm a fundamental truth: all children—born and unborn—are made in the holy image of God.

What a contrast the US President presents to the Leader and the Deputy Leader of the Opposition here in Australia!

On 6 March, Bill Shorten and Tanya Plibersek pledged that, if Labor won the forthcoming federal election, they would take measures to promote abortion throughout Australia. Specifically, they pledged that a Labor government would use its funding powers to:

The election of a Shorten-led Labor government in May will greatly increase the dangers faced by defenceless unborn children, and the Australian Labor Party apparently feels that broadcasting this fact will help them win the election. Of course, they are not talking in terms of killing babies, but of women’s rights to access “health services” wherever and whenever they want.

Sadly, the present Liberal-Nationals coalition government seems to see no electoral advantage in opposing the Labor Party’s plans. Indeed, in his own way, Prime Minister Morrison does not compare well with President Trump, either. When responding to Labor’s abortion announcements, Morrison said:

I’m a bit disappointed that it is being raised in the eve of election in a very politically charged context. …

I don’t find that debate [is] one that tends to unite Australians and I certainly am not going to engage in the political elements of that discussion, because frankly I don’t think it is good for our country.1

The Prime Minister made no defence of the unborn. As a Christian, he presumably is opposed to abortion, but he could not bring himself to say so. Instead, he opposed the Labor Party’s proposals on the grounds that they are ill-timed and divisive. And in his attempt to take the moral high ground, he showed just how morally bankrupt he is: for he conveyed the idea that avoiding controversy is a higher good than stopping abortion.

Still, to be clear, Scott Morrison’s cowardice is not as base as Bill Shorten’s wickedness. Morrison’s abandoning the unborn is not as base as Shorten’s attacking the unborn. So, for Christians and other prolife people, there is still a choice to be made—a choice between bad and worse. For pity’s sake, for the sake of less slaughter, pray that the Australian people will choose Scott Morrison the Bad, not Bill Shorten the Worse.

Indeed, let us pray that God might infuse Prime Minister Morrison with some of the compassion, courage and integrity of President Trump, so that he might exhort the parliament and the nation, “Let us work together to build a culture that cherishes innocent life. And let us reaffirm a fundamental truth: all children—born and unborn—are made in the holy image of God.”

Andrew Lansdown
Andrew Lansdown is the writer and editor for Life Ministries. He writes extensively on a wide range of topics including abortion, free speech, sexuality, theology, parenting, marriage and family. Andrew is also the author of twenty-one books and eight chapbooks of poetry and fiction. His poems, stories and essays have been published in over seventy magazines and newspapers and are represented in over one hundred anthologies. They have also been read on ABC and BBC radio, and translated into several languages.
Recent Posts 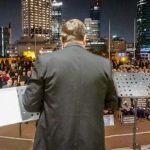