The Western Australian Labor Government is set to argue for “safe access zones” around abortion facilities in the High Court of Australia, leading the way for new laws covering “protests”.

In 2016, Kathleen Clubb (the mother of 13 children), was fined $5000 for simply offering assistance to women approaching an abortion facility in Melbourne. The case has now been brought before the High Court, with Kathy and her lawyers arguing that Victoria’s laws are incompatible with the freedom to political communication in the Constitution of Australia.

In a submission on behalf of WA Attorney-General John Quigley (who has consistently voted pro-life in the past), the government argued that the Victorian law does not prevent protests associated with — or in the vicinity of—abortion clinics. “The inability to engage in behaviour within 150 metres of an abortion clinic … does not prevent any person from putting a message that they best consider will have the greatest impact on public opinion or political or legislative change.”

This claim is wrong on at least two grounds.  People like Kathleen Clubb, and groups like 40 Days for Life and the Helpers of God’s Precious Infants, do not gather in front of abortion facilities to instigate political or legislative change, but to quietly pray for pregnant women and their unborn children with the hope that some women will see them and change their minds. Because of their presence, many women have rejected abortion and chosen life for their child.

Furthermore, restricting these groups from gathering within 150 metres of an abortion clinic will have a huge impact—it will effectively end their capacity to help pregnant women, which is precisely the reason behind the zones.

What YOU can do to prevent similar laws coming into force in Western Australia:

A response to the West AustralianAbortion, Euthanasia 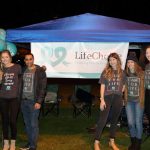