With the Lord: Wilma Drew 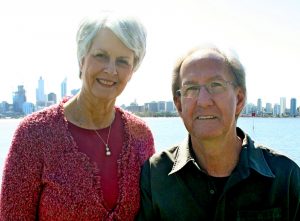 Wilma Drew, the beloved wife of David (the founder of Life Ministries and continuing board member) passed into the presence of her Lord on Tuesday, 5th April 2016.

Wilma and David were happily married for 52 years. She was the loving mother of Stephen, Bradley and Nadine, and grandmother of three children. She was greatly loved by all who knew her.

Wilma and David were deeply involved in a music ministry in Western Australia that spanned several decades. She and David performed at the Concert Hall on eight occasions, at the Entertainment Centre on three occasions, and in several country towns including Bunbury, Albany and Katanning. When Wilma was not singing, she was capably accompanying on piano.

Wilma served as the church organist at Claremont Baptist for almost 20 years. She sang with the UWA Choir for 15 years. This involved repeated performances of the Messiah at Christmas time, as well as several classical Christian performances. In the late 1980s Wilma and David were often invited to sing duets at churches across the metropolitan area.

More recently, in what could have been retirement years, Wilma and David had the privilege of operating a school bus for nine years for children with special needs. David was the driver and Wilma was the aide who looked after the children.

Wilma was a kind, gracious and helpful Christian woman who was loved deeply by family and friends. She will be warmly remembered as a person with a servant’s heart, for she preferred serving to being in the limelight.

When speaking at her funeral service, David closed by saying, “Wilma has passed into eternity where God lives. She has moved into a different dimension of time and space. So, Wilma is not dead but alive, at the maximum level that God is capable of making a person alive! This may sound like ‘pie in the sky’ for some of you, and a very vague concept compared with what you are experiencing in your life. But the fact remains, that we are all going to die sooner or later. As a family we have absolutely no doubt that Wilma’s true life continues on. … Wilma’s spirit is free and soaring in the presence of God!”

ANZAC and Easter: Concerning the Great and the Greatest WarsGospel, Perspective